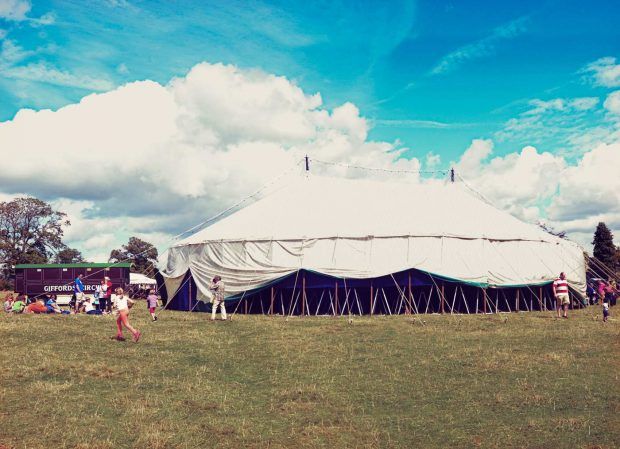 I was cycling in London when I had the phone call. An that time I was cycling a lot in London, on average spending about 2 hours a day on my bike. Rushing between rehearsals and giving guitar lessons mostly. It was winter. and I remember that it was very cold and I didn’t have gloves. It was so cold that I was cycling and alternating with one hand in my pocket and the other on the steering, but after awhile even that was too much and the cold was too painful, and I had the idea to take off my socks and put them on my hands to use as gloves, which I did, and it worked, happy discovery. That’s when I had the phone call.

FAITH: Sam, how are you?

It was Faith Elliot (now Faith Ristic).
I’d recently met her at a friends wedding in Devon (south-west UK), we’d spent all night inventing games like the Crap Olympics, where the goal was to act out some triumphant Olympic act, like a gymnastics triple reverse somersault, as badly as possible and then act like it was incredible. The night finished when the sun came up and we cut off her brothers dread-locks and threw them in the fire (not against his will of course)…needless to say it was a good night.

SAM: Ok, you?
F: Yeah, yeah, good, good. Can you play double bass?
S: No, why?
F: Do you remember the circus band I told you about?
S: Yes
F: Our bass player has had a breakdown, and won’t come on tour, it starts next week.
S: Oh!
F: So I thought of you. What do you think?
S Well I can’t play bass, but…my friend has a double bass…maybe I could borrow it….

Anyway, I borrowed the bass and had one lesson

A week later I showed up in Oxford with my dear friends dear bass, which I was still becoming newly acqauinted with and met Faith. We went through the music scores she had prepared for me, till about 5am, then went to sleep, got up at 6am, and at about 8am we were at Giffords Circus in a small village hall in a tiny village somewhere in the Cotswold full of French Circus people. 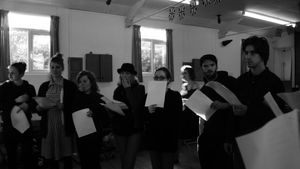 Everyone was meeting and organising things to show to the ‘Giffords’, the couple who personally owned the circus, and who’s decisions had the habit of changing people’s lives forever! When it came time to play the bass, I did my best to look like I knew what I was doing, something similar to that kid in the choir who just mimes that they are singing. Somehow I got away with it. But then the 1st problem, I didn’t know how to put the double-bass back into it’s case!

I had to find the moment when no one was looking to try and figure out how to put the thing away! Obviously a real bass player would put his bass away without thinking about it, because they would have done it 1000’s of times, and could do it whilst having a conversation and gracefully and effortlessly slide their bass into it’s case. of course. But I just couldn’t see how to do it. But eventually I managed to get the thing away, and relax, but then the 2nd problem!

GIFFORDS: So Sam, it’s great that you could come at short notice, we really appreciate that. We’d like to see what else you can do. We want you to do a little improvisation with some of the other actors, and Faith says you can play guitar, can you do something?

I was dizzy from sleep deprivation, had just survived the orchestra rehearsal, managed to put the bass away without bringing unwanted attention to myself, and was ready for that life-saving coffee and to congratulate myself on getting away with it, but now I had to improvise with two French actors, and was anything but sure!

The two actors started improvising together, they were both playing banjos, and were really funny and brilliant. I was at the back of the hall with my guitar and some strange comedy blonde wig, and at the front of the hall were the ‘Giffords’ and the rest of the circus people sitting on little chairs watching attentively to see what would happen. 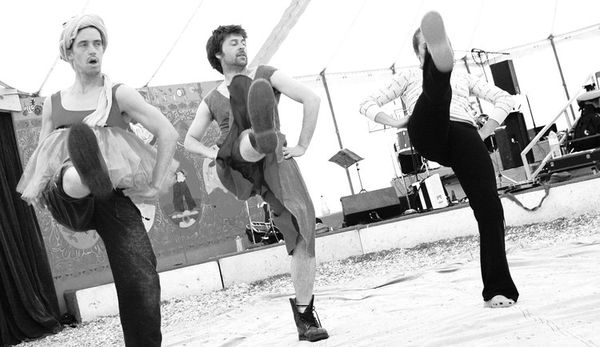 It was one of the those fight or flight moments. I could either just confess the truth, that I was a fake, couldn’t play bass, apologise for wasting everyone’s time and do my best to leave as quickly as possible or …

I ran screaming into the middle of the two banjo players and launched into an epic flamenco lament about my lost dying husbund, and the other two actors immediately became the dead husbund and the murderer and somehow it all went from there….

…I got the job and that’s how I ran away with the circus.